It is possible to transfer in the oocyte, apart from a nucleus, other organelles of a donor cell, such as mitochondria. This technique is known as cytoplasmic transfer – the cytoplasm is a gel-like substance that contains the nucleus and cellular organelles.

In this page: Details

There are women with fertility problems that can be attributed to deficient or damaged oocyte mitochondrial DNA. The cytoplasmic transfer can be performed to oocytes already fertilized in vitro, in order to avoid transmission of a specific genetic disease.

→   In the first approach, known as pronuclear transfer, the pronuclei of a fertilized oocyte are transferred to another already fertilized (with husband’s sperm) oocyte, of another woman (donor). The donor oocyte has already its two pronuclei removed but still contains its own mitochondrial DNA.

→   In the second approach, known as maternal spindle 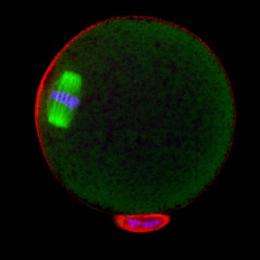 transfer – MST, the nucleus is removed from the mother’s oocyte and transferred to the oocyte of another woman with healthy mitochondrial DNA that had its own nucleus already removed. The oocyte is then fertilized with the husband’s sperm and the embryo created is transferred into the woman’s uterus.

There are already children born worldwide, using this technique and they have in all their cells not only the deficient mitochondria inherited by their mothers but also mitochondria originating from the donor’s oocytes. These children have three identifiable genetic parents, without being clones.

Cytoplasmic transfer is not considered legal in many countries, as human genetic engineering is controversial, due to ethical and safety issues. In the United States, it is illegal to fund research programs related to cytoplasmic transfer and genetic engineering of embryos in general. However, private research centers are free to carry their experiments, provided that all techniques used are safe.

Many scientists claim that it is not only an unethical technique but also a doubtable one from a clinical point of view since the role of mitochondrial DNA in fertility problems is still debatable.